One of our Year 8 netball teams entered a Northern Mystics 'Sideline Behaviour' movie competition last month, and they won!

The movie had to show what positive sideline behaviour means to your team.  People had a few weeks to vote through social media (Mystics & Sky City Facebook pages) or at voting stations at a Mystics game.

The judges were most impressed with the slogan, "Be the crowd that makes us proud".  The girls have won tickets to a Mystics game, a chance to meet the team, dinner and overnight stay at the Sky City Hotel.  Great work girls, coach Mose Tui and Mrs Lagitupu for putting this movie together!
Posted by Sally Va'afusuaga at 6:05 AM 1 comment: 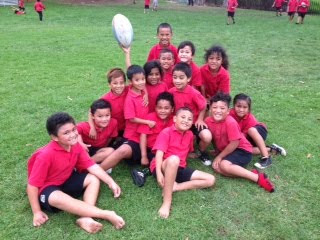 Our 2 girls and mixed rippa rugby teams - played with a lot of heart at the Auckland rippa rugby championship tournament yesterday.  They truly did their very best and we are so proud of their efforts.

Held at the May Road War Memorial Park in Mt Roskill, they both had won enough games to make it to the final against the same school, Holy Cross Papatoetoe.

Holy Cross are the defending Auckland and New Zealand mixed champions so our team knew that they would be tough opponents. Having beaten them in the pool round game 4-3, the team were going to face a hard-fought battle in the final.

Both teams played so well, however it was all over when Holy Cross crossed over the try line in the dying minutes of the game to win 3-2.  Meanwhile, playing at the same time, our girls team were playing a close match, but also went down by 1 point, 2-1.   There were a few tears which showed how much they had really tried to win but it wasn't meant to be and we will learn and grow from this.  What we should celebrate the most, is how much they had improved in their skill level, their attitude and their knowledge of the game.

So to end the day on a high and happy note, we were given 30 free tickets to attend the Auckland Blues Super Rugby match against the Sharks last night.  This is always the best part of the day for our kids.

They got their faces painted, received a free Blues flag, a 'try' banner and entered the 'Super Bang Bang 'Dab' dance competition to try and win $10,000.  The night was a wonderful occasion that they'll always remember.

Thanks to our coaching and management team, Mazel & Te Awhina Vaevae, Tasesa Folau and Zac Moran and also our families, for the time spent over the past few weeks in preparing and supporting our kids at the rippa tournaments.  We need you again because we will be back next year to have another go at the Auckland title.
Posted by Sally Va'afusuaga at 9:58 AM 4 comments:

Every lunchtime our faithful, Year 6 sports monitors (called the Sporty Botz), give out gear for any child to play with. Our kids love the opportunity to play with any sports equipment. They make up games with their friends or even use it to practise drills and skills that their coach has taught them. It's a nice way to be active and to have fun with friends at lunchtime. 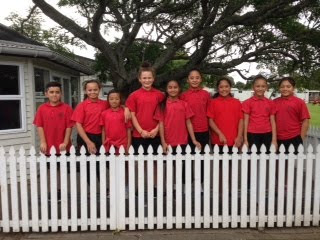 After the lunch eating bell has gone, they simply line up and ask politely for something to play with. After they've finished playing with it or when lunchtime ends, they have to return it to the trolleys or to the sports shed.  There are 3 monitors each day with a leader who is in charge of the key & lock up routines. We always have a fourth person as our "back up", reserve in case someone is away.

Our Sporty Botz team meet every fortnight with Miss Va'afusuaga, the sports teacher, for half an hour to chat about how things are going and ways to improve our jobs.


This system has been working well this term with more improvements to make, but we're so thankful that we've got a great team of monitors.
Posted by Sally Va'afusuaga at 2:04 PM No comments: 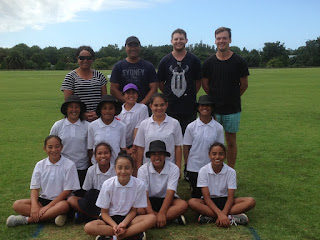 For the first time, possibly in our Pt England School history, we have entered cricket teams to play for a club in the Saturday Auckland cricket competition.

This year we registered 2 teams under the Ellerslie cricket club: Year 5-6 boys and U12 girls.

Our boys played 5 games in a post Christmas competition on Pt England Reserve. It has been a huge learning curve for them and they did very well against seasoned players.  Nonetheless, it has been a most enjoyable experience for the boys and their families and we are proud of them.

The U12's girls team had a magnificent season - undefeated, winning all 13 of their games over the summer at Melville Park in Epsom.  Here are their remarkable statistics:
Opposition: 138 wickets for 530 runs. Our girls: 59 wickets for 1685 runs.
An outstanding achievement from a team a girls who improved each week in their efforts and their skills.

The girls collected their winning badges at the Auckland Cricket Association's Junior prizegiving at Eden Park on Wednesday 30th March.
Posted by Sally Va'afusuaga at 6:49 AM No comments: 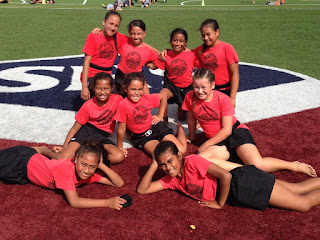 The Eastern Zone primary girls Rippa rugby final was played between our team and the St Heliers School girls team on Monday 4th April. The lunchtime weather and conditions were perfect, on an impressive artificial turf at St Heliers School.

Our girls came out the winners, beating St Heliers 5-2, with Jorelle scoring 3 outstanding tries and Naomi and Kerstein scoring a try each too.

They will join our mixed team who are also the recent winners of the Eastern Zone title in their grade, to play in a tournament at Eden Park on Saturday 16th April.

The winners at Eden Park will represent Auckland in Wellington at the national Rippa rugby tournament later this year.  That would be pretty exciting!
Posted by Sally Va'afusuaga at 6:24 AM 2 comments: