Before the actual winter netball season has started, several of our Year 7 & 8 girls were nominated to trial, to get into one of the local Auckland Netball Centre's representative teams.  Last night was the Year 7 trials where 122 girls competed to be selected in the final 22 spots for two teams - the Year 7 'A' team and the 'B' team.  Like all representative trials, it's competitive and you try your best to do something special to make you stand out.  After very short notice, I'm glad the girls turned up and did their best.  They gained an experience that will help them measure where they're at and the potential they can be, to be the best.  The Year 8 trials are being held tomorrow night.
Posted by Sally Va'afusuaga at 10:21 PM No comments:

On March the 10th, our intermediate boys and girls teams competed at the Eastern Zone Tag Football tournament that was organised by the ARL (Auckland Rugby League).  The other teams were from 2  local schools, Sylvia Park School and Stanhope Road School - it was a day for all children to experience playing a fast growing summer sport in New Zealand.  The tournament was held at the Mt Wellington Warriors rugby league home grounds on Thompson Park.

Two out of three Pt England teams won all of their games on the day that gave them the opportunity to compete at the Auckland Inter-Zone tournament on Thursday the 26th of March in Greenlane.

The Auckland championship tournament was really challenging for our teams.  Some of the boys and girls were a part of last year's Auckland Primary Tag Championship team as Year 5 & 6 students, so playing against mostly Year 8 players, was an experience for them to grow from. They played games against the winners of the West, Central, Harbour and South-East zones who were very good competitors - our final placings overall were 6th for the girls and 8th place for the boys team.   We're very proud of our teams' efforts and look forward to playing this game heaps more in Term 4.
Posted by Sally Va'afusuaga at 11:56 AM 1 comment:

Swim & Survive - Thank you to our funders!

All Pt England children had 8-10 half hour swimming lessons this term at the Glen Innes Aquatics Centre which is situated next to our school.  Learning how to swim and survive when problems arise in the water are essential life skills that our students need to know.  Our Year 1, 2, 7 & 8 classes were taught by one instructor and the classroom teacher.  However, 150 of our Year 3-6 students had the luxury of receiving lessons in small groups from 3 swim instructors, free of charge.

Being a decile 1 school, our Year 3-6 classes were eligible to participate in the GAAAP swim programme (Greater Auckland Aquatic Action Plan).  We are one of 147 Auckland schools  in the decile 1-6 category that receive free lessons by trained professional instructors.  Our students have made a huge progress since the programme began in 2012.  Here's our data:

According to the statistics provided by the Aktive Sport and Recreation organisation, around 90% of 7-9 year olds can't swim 200m unaided and 5-13 year old Maori & Pacific Island children are over-represented in drowning statistics.  So we are all extremely grateful to the funding partners who invest in the programme: Sport NZ, ASB Community Trust, Water Safety NZ, Sealord and the Auckland Council.  On Wednesday the 18th of March, it was an opportunity for Aktive and our children to say thank you to the funders.  The 500,000th swim lesson (Year 6 class) was filmed and celebrated on Wednesday the 18th March along with our principal, the Mayor of Auckland and the MC (master of ceremonies) was the television entertainer, Pio Terei.

The Day the Hokule'a landed on Pt England Beach

One of the iconic Polynesian voyaging canoes, the Hokule'a was launched on March 8th 1975.  Forty years on, 12 schools in our Manaiakalani cluster, had the privilege of witnessing the magnificent waka land on Pt England Beach, also accompanied by another voyaging canoe, the Hikianalia, that carried Hawai'is education leaders.  It was a marvellous occasion that will always be remembered. More information can be found on their website: Hokule'a - Point England Welcome

It was also the day that 23 intermediate boys played friendly touch games against 3 teams from the Kings Preparatory School in Remuera.  After such a busy, significant morning, where a number of boys were the leaders, videographers and carers for junior students - they were tired.  However, they still had enough energy to travel to Kings to play a game of touch.  When we arrived, the boys who had never been there before, were so fascinated by the spongy artificial grass, that some chose to play bare foot or in socks.  A few chose to lie on it, and could've easily had an afternoon nap but they had games to play!  The 'B' and 'C' grade games were fairly close but our 'A' team, comprising of mostly Year 7's were beaten by a well prepared team.  They will be better for the experience and can build on their knowledge to make improvements by Term 4 when we'll meet each other again in touch.

This is the second year we've played touch against Kings in the first term and coming up next term, it will be our third year in playing rugby union against their 15-aside U68kgs team.  We have also played softball against a couple of their teams in the past as well.  It's a friendly sports exchange that's a mutually beneficial experience for both schools.
Posted by Sally Va'afusuaga at 12:35 AM 1 comment:

Our Year 5 & 6 mixed rippa rugby team earned a place to play at Eden Park against the champions of the West, South and Central school zones, by winning all of their games at the Eastern Zone Challenge Series on Friday, 27th March.  Our girls team automatically qualify for the Auckland Inter-Zone tournament as they were the only team who entered the series in our zone.

The tournament at Eden Park will determine who will represent Auckland at the annual September NZ national tournament in Wellington.  The prospect of playing at the epic Eden Park where the NZ All Blacks won the World Cup in 2011, is exciting enough for the players and for some team members, it will be their first experience - the team is thrilled to be going!

They played 6 games against Howick School, Elm Park and Glendowie School, playing the final in a tough encounter against a coherent Glendowie team, just winning 5-3.  The highest male try scorers on the day were Flynlay Kake (7 tries) and Alfa Kepu-Saafi (7 tries) and our speedy female winger, Faioso Faletanoai (5 tries).  The girls were solid contenders, who were able to match male opponents with their skills and confidence, contributing overall to a strong team performance.

This is the 3rd year that Pt England will represent the Eastern Zone area, having either a mixed or girls team compete in the fiercely contested tournament.  This year will be no different.  What's also rewarding about their win, is that they are invited to stay and watch the Super Rugby Round 11 game between the Auckland Blues and the Western Force team on Saturday, 2nd May - a great initiative created by the ARU, Auckland Rugby Union.

And they're off!  Our Soap Box Derby team competed in the Auckland Eastern Zone competition yesterday.  It's a day where trolleys could be racing down the course at around 60kph in about 30 seconds.  Venetia Joyce, Yvone Vili-Tesi, Chyrus Valoa and Talita Va'afusuaga were our 2015 Year 6 drivers, in our eye-catching, shiny 'Acer Racer' car.   Actually the car is not new, but the body paint is - it now has a specially made silver chromed covered skin, kindly sponsored by Acer Inc who also provide chromebooks (netbooks) for our Year 4-8 students.


The race took place on Stonefields Avenue, beside the AMI Auckland netball courts which is only a 5 minute drive from school. The Pit Crew on the day were Flynlay Kake, Waimaria Scott and Aysha Lote with the meticulous coach, our associate principal, Garth Jacobsen and his wife Elaine, the efficient manager as the team leaders.  There are many benefits for our students, who learn about the design and mechanics of a soap box car, and put into practise, the teamwork that's essential for this competition.

The six fastest teams in this weekend's competition will go through to the New Zealand finals on March 30 and the top driver at nationals gets to hit the track at the World Championship in Ohio.

Soap Box derby races are a very big deal in America - check this out: All American Soap Box Derby.  If you want to see a spectacular race with some impressive, creative cars - then watch this clip:
Awesome Soap Box Derby Cars - Los Angeles Race, America
Posted by Sally Va'afusuaga at 12:04 PM No comments:

Before I start posting lots about what we've been up to so far this year which has been heaps, I would like to share a list of our best sports people for 2014.  The following students received awards at our annual end of year school prizegiving. 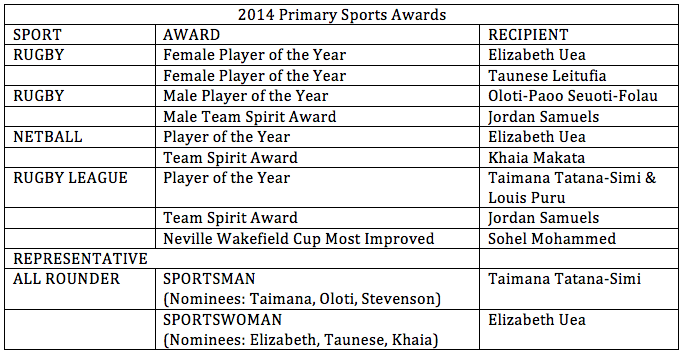 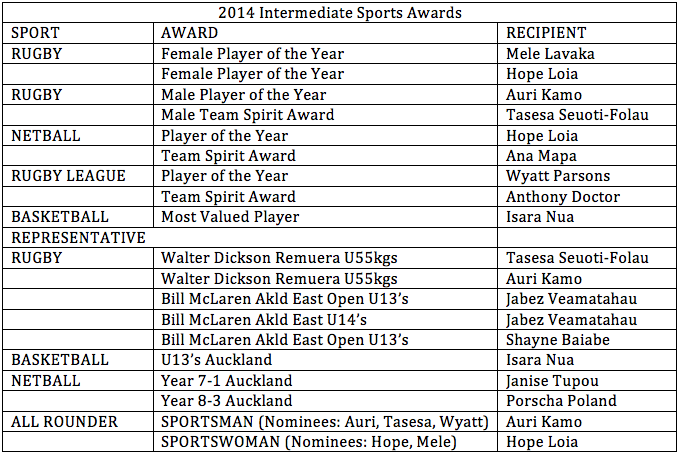 Posted by Sally Va'afusuaga at 7:30 PM No comments: